WELCOME BACK Everyone!
As usual I'm LATE AGAIN!  ⏰😩
Sheesh!  where has the time gone?
I honestly meant to have Part 2 published early last month but wouldn't you know, I've been totally engrossed in the Johnny Depp and Amber Heard defamation trial on youtube, and between that and actually working on the bedroom of this DOLLHOUSE, I've missed my blog deadline by a mile- 🤥 yup- MY BAD!
Anyway, I'll try and make it up to you in this post, because I'm going to show you what I've finished inside  the Dower House living room AND I'm going to show you what and how I'd made ( then remade) the leaded glass windows in the living room using an unconventional method, which happened to work for me.
There's A LOT to cover so grab yourself a hot cup of coffee or tea because this will be a long, Long,LONG post and times a-wastin' -
beginning with -
THE New FRONT DOOR 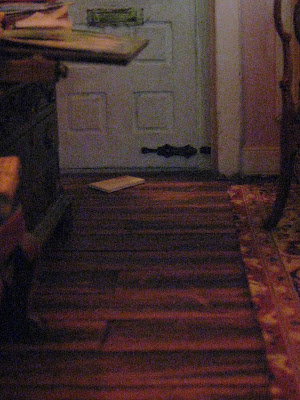 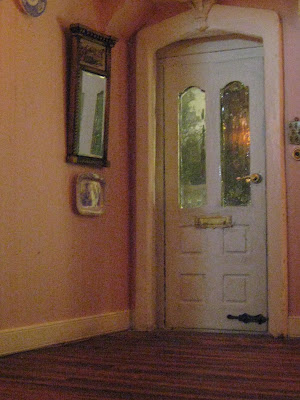 I had enough wood trims for the replacement panels,
but historically
me and wood have a very shaky relationship.
I inevitably waste more wood than I actually use.
With me it's -
measure OFTEN then cut it WRONG anyway.
I painted lots of trims knowing that I would mess it up and of course I did.
As for the acetate,
I had just enough of it
to make the second set
of"glass"panes- whew!
It is difficult to see in the photo below but I cut 3 separate panels of clear heavy plastic and built the frames around them
into one single unit. 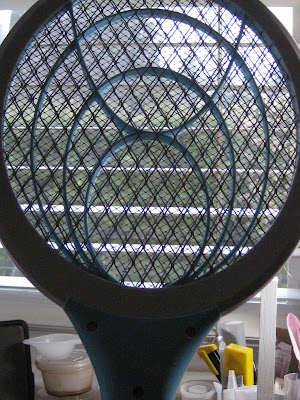 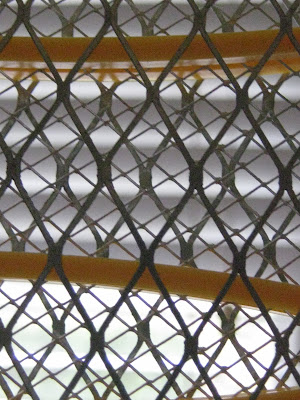 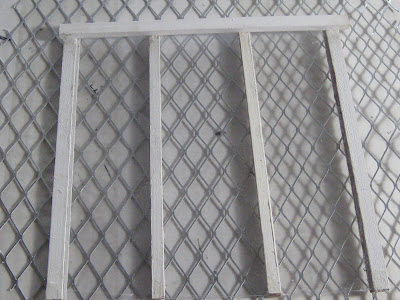 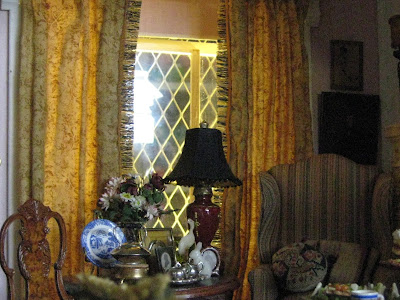 Once I was satisfied that it would work,
I cut out 3 separate sections of leading for each panel using tin snips and laid them between the wood strips.
To hold them in place
I used a tiny bit of Fabri-Tac around the edges of the metal to prevent them from shifting as I continued to build up the wood trims around them. 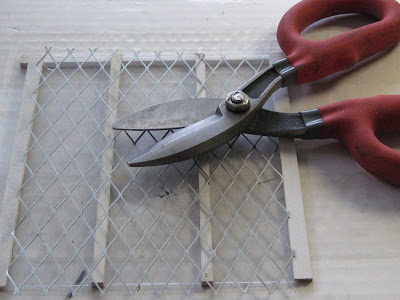 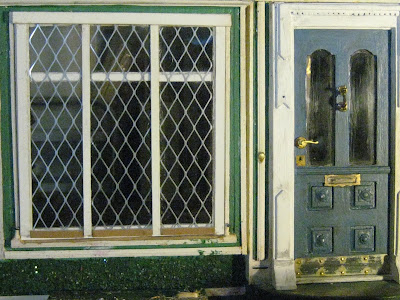 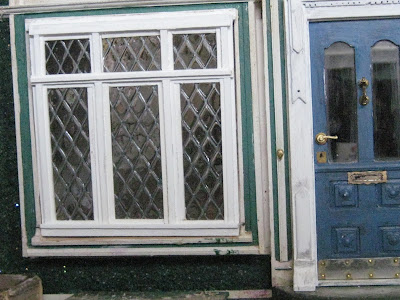 I installed the new window.
As you can see,
this dollhouse is in desperate need of a repainting
which I shall do LATER.
For me I start with the interior and develop the character of the owner.
Later, (much later) I'll work on the exterior after I've established the history of the house
and its current occupant-
kinda backwards to the norm but that's how I like to do it. 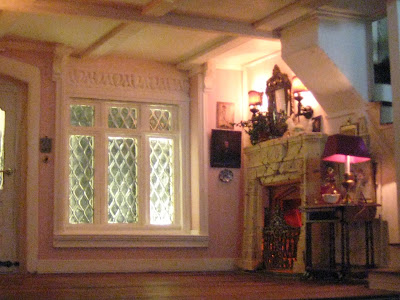 is by artisan Sue Sherrill
an Ebay purchase
but the pictures on the wall
are magazine cutouts
which I pasted onto heavy card and hung with a wire and/or BlueTac
The majority of artwork in the living room,
as well as in the bedroom are mounted onto card-stock which I've edged
with complimentary wood stain furniture markers.
or a matching felt pen.
THE MANTLE
Once I'd decided that I wanted a green plant on the mantle, I quickly made one using some dried green plant materials from my stash.
But then, as usual,
I changed my mind and decided to replace it with something different.
Since I specifically wanted an overgrown ivy
to crawl and drape around the mirror and mantle,
I decided I needed to make one myself. 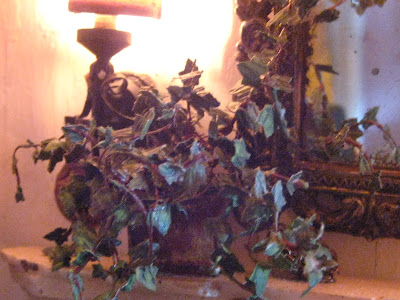 I made the ivy using multi-twists of fine copper wire which I shaped and then painted.
Once the stems were dry,
I applied
tiny ivy leaf paper punch outs
securing them to the stems with
white glue and super glue.
When all was set,
I brushed over the stems and the leaves with a thin mix of white wood glue and water.
The stems were planted into a square plastic
spray nozzle which I'd painted and glazed with UV resin.
I filled the vase with brown plasticine
to hold the ivy in place. 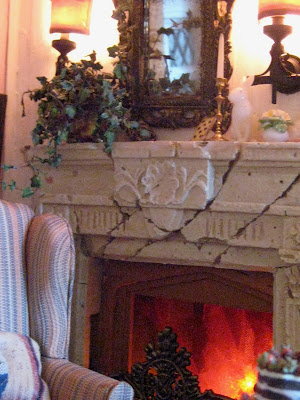 I actually enjoyed making this plant and will probably make another for the Dower House bedroom. 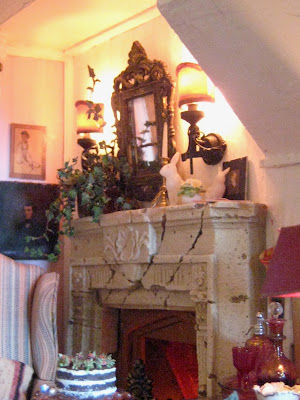 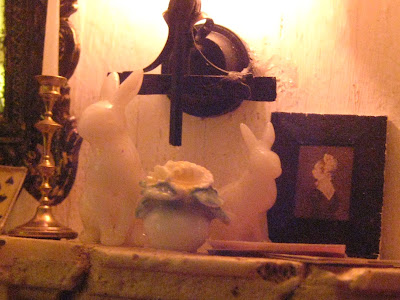 Also on the mantle, are a brass candlestick; a playing card stud earring used as free-standing picture frame; another magazine cutout; a tiny Capodimonte china ornament; and 2 white rabbits from the ebay store of
Giulias Miniatures
which I painted with clear UV resin.
The third rabbit from this set, sits on top of the Secretary. 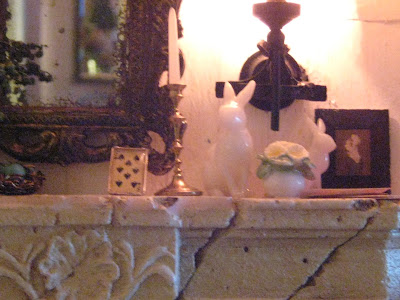 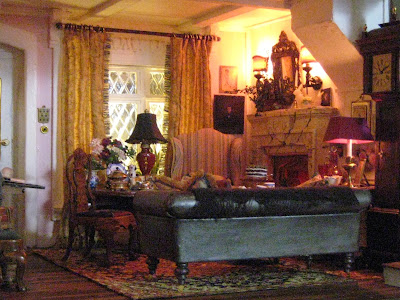 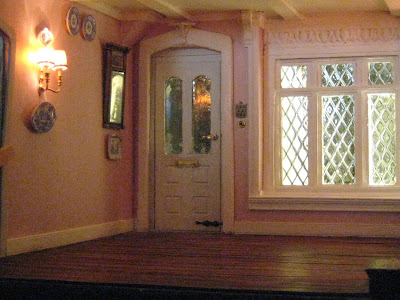 Initially my plan was to use ALL of the available wall-space in the Living Room
to showcase a number of the Dowager's prized pieces of
miniature blue and white china.
But
as the room began to fill up with other things,
the only wall left for a china display was the left one.
However
the large secretary in the middle of the wall
reduced the space even further to
the area above it
and a tiny bit on either side of it. 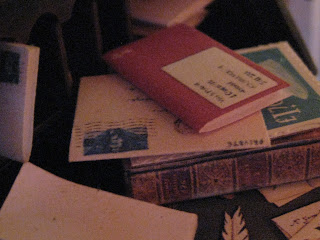 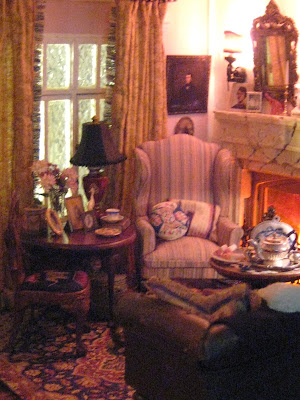 So having come full circle
we are back again at the window.
In front of the window I have installed a wide arm chair
from a miniature furniture lot purchase-
Ruby Lane Miniatures
It was already upholstered in a multi-stripe of light & dark stripes of pink, gold, beige,
and gradient blues

The silhouette on the table is another magazine cut out
mounted onto card-stock.
The sterling silver cream and sugar on the silver tray
were all made by Don Henry.
The tray came from
THE LITTLE DOLLHOUSE COMPANY
and the silver sugar and cream I acquired from
SWAN HOUSE MINIATURES 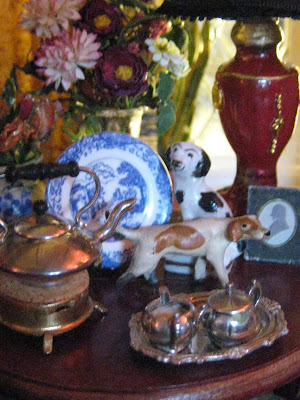 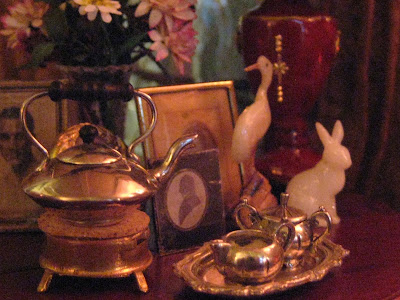 The silver teapot is one of my
FAVOURITE THINGS
I can't remember where or when I bought it,
but what I liked about it
was its unique shape.
When it finally arrived in the post,
I was SMITTEN even more! 😍
It's hand-signed but the signature is so faint,
that it can only be deciphered via a jeweller's loop.
The knob on the lid and the carved handle are both made of (ebony?)wood.
There's also what looks like a teeny tiny hallmark
stamped in the metal
which is impossible to make out even with my loop.
Regardless of whether it is sterling silver or not,
the entire teapot with its curved spout and squat body is
Altogether LOVELY 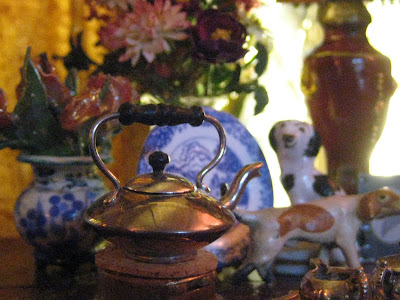 SO there it is-
YOU'VE SEEN ALL THERE IS TO SEE!
SUCH A LONG POST😂
but I hope you've enjoyed the tour
and found it worth the wait! 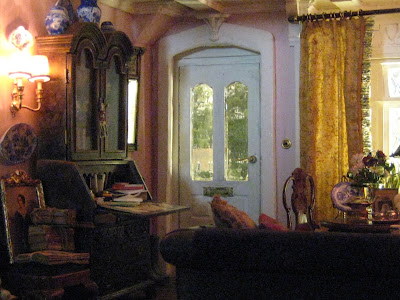 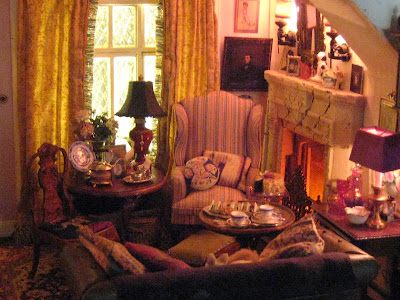 THE END
But WAIT!
before you go-
here's a teaser of the Dower House bedroom which I'm currently working on....
and  I can hardly wait to show it to you-
IT WILL BE READY"to post...
very soon!😜 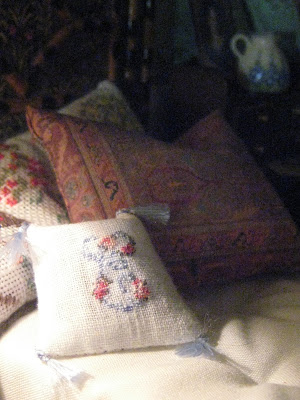 🎶"Midnight at the oasis Send your camel to bed Got shadows painting our faces-  Traces- of romance in our heads" ....  I was in m... 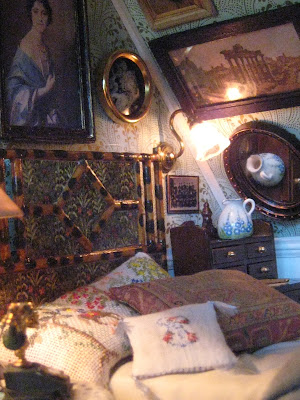