The ghost of pre-Christmas recently past

what does THAT mean? 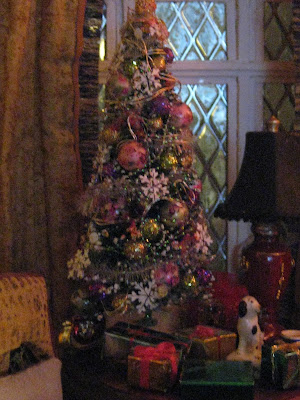 And although my fanciful Christmas tree
was kinda tall for the window table,
I thought I could learn to live with it.
That is until it was lit!
That's when it really bugged me! 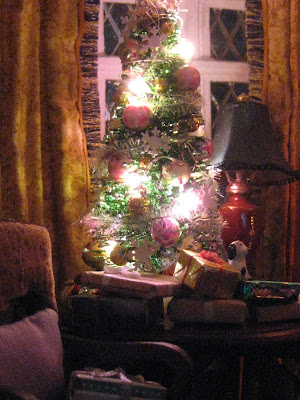 The tree lights were too bright!
I tried to tone them down with pink glass paint
but they still glared like lasers.😱 💥
On top of which,
when the lights were turned on,
all the tree ornaments visually disappeared. 👤
It wasn't as if it was
the  end   of  the  world
but when little things keep bothering me,
I usually respond to them thusly:
a) I'll pretend to ignore them but I'm still really aggravated
b) I'll divert my attention towards something else so I don't have to deal with it.
c) my deliberate avoidance can no longer sustain itself
so I surrender then I fix it!
The following photos were
during the early 'A' and 'B' stages 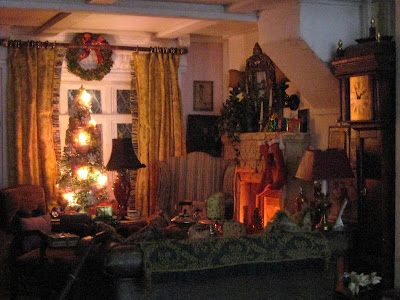 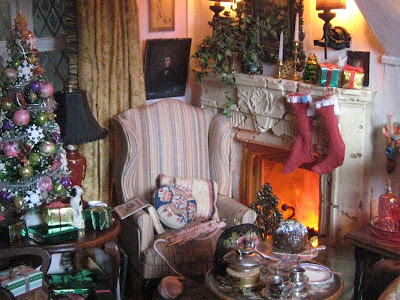 I decided to take everything off the mantle
and make a garland,
hoping that it would take my mind off the tabletop Christmas tree.
Janine of Minworks
has an EXCELLENT method
used for arranging the shelves in her Swedish Kitchen
which  you can read about  here.
Rather than affixing items directly onto the structure,
Janine cuts a duplicate of the surface to be decorated,
from a sheet of thin acetate,
and glues or waxes china, books, linens et al,
to the plastic liner and then slides her completed arrangements into place.
When she's ready to change things around,
she just lifts it up and out in its entirety.
So I decided to do the same!
🎄
Since my fireplace is secured to the wall
with Museum Wax, it was easily removed
which made decorating the mantle a piece of cake. 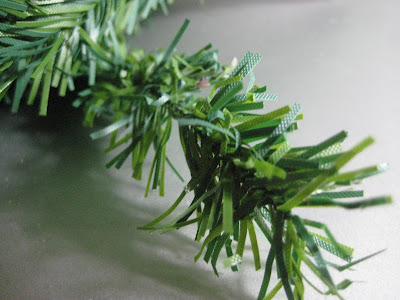 I glued a long length of wired garland
onto a clear acetate base,
which I draped down at either end of the fireplace.
I glued layers of lycopodium into the garland until most of the garland base was obscured. 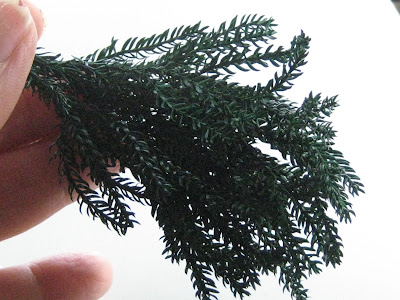 Initially,
I'd wanted to keep it "simple" so it wouldn't compete with my Christmas tree.
The first things I added were"mandarin oranges". 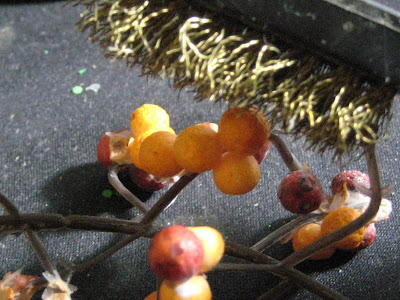 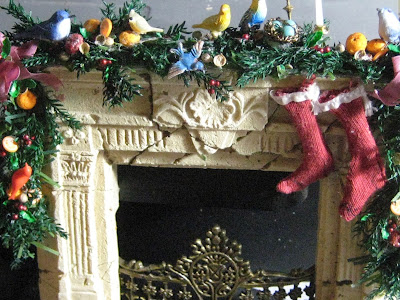 YES, yes
It's VERY FUSSY!
but I liked it.
AND SO
After executing steps A and B of my
avoidance/distraction strategy
I felt I'd FINALLY reached
STAGE 'C'
therefore,
I would remove the existing tabletop tree and make an entirely new one
HENCE
the mini tree tutorial
as outlined in my previous post.
SO-
with 4 new trees 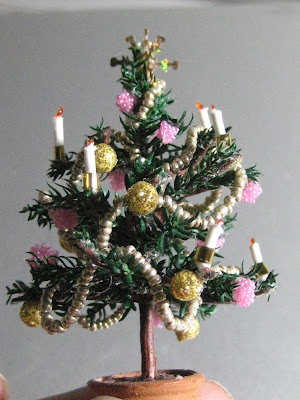 this is the tree I went with;
smaller, less busy,
and without electric lights. 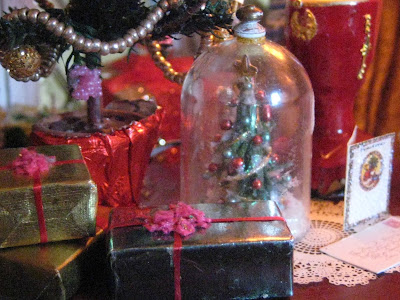 THEN
I bit the bullet and swapped out the
the non-working table lamp
for one that did work,
which meant painting the replacement lamp
to match the old one;
then hooking up the wires to the power
which THANKFULLY I'd had the foresight to diagram both on paper and in photos.
ahhhh
so Much better!
now back to the decorating 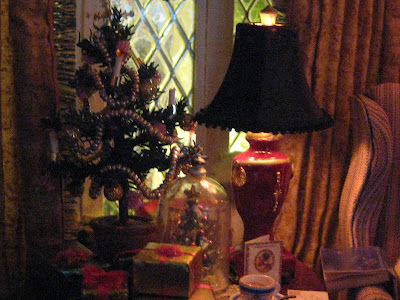 A few months ago, I'd purchased
a large green picnic hamper from
LUDMILLAS Creations  on Etsy 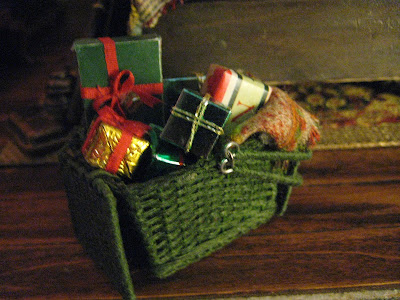 I filled the basket with gifts 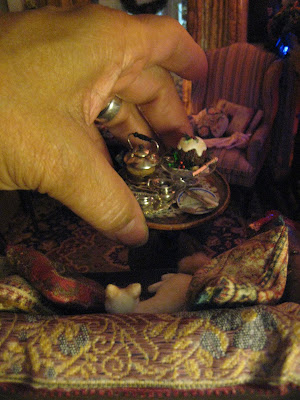 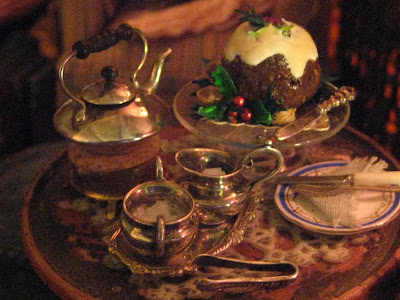 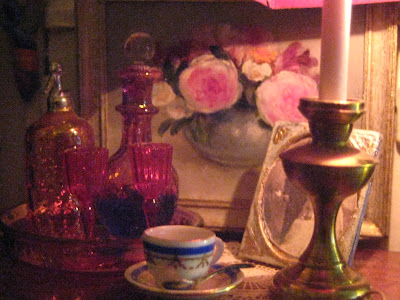 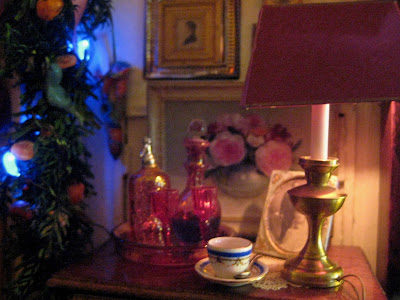 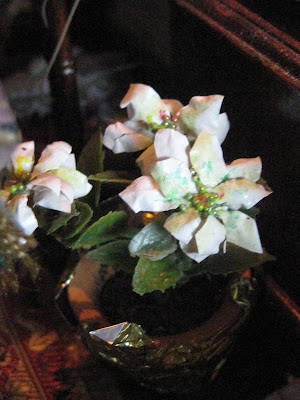 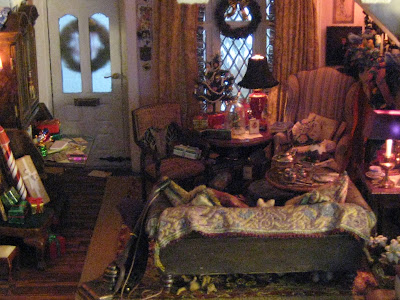 Just out of sight,
a kitten is happily engaged in shredding
the underside of the Dowagers old leather sofa-
meow!
😻😻😻 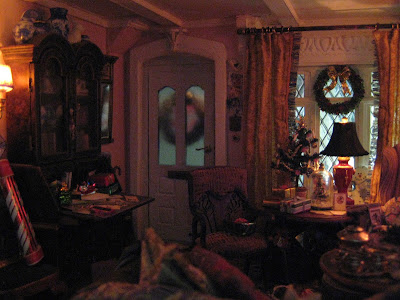 and yet this room now looks
more RIGHT to me.
And if the first tree hadn't been an "issue"
then perhaps the bird garland might not have happened at all- 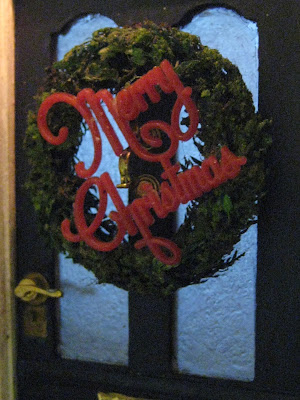 elizabeth
As a reminder:  I'm still having problems with the comment section. If you try to leave one before the sidebar finally appears, or before the whirly-thing in the tab stops twirling, then your comment won't register.  This can take up to 60 seconds before the program stops loading and finally kicks in- Talk about frustrating!😕
oh well,... it IS what it is. 🤪
at December 23, 2022

The ghost of pre-Christmas recently past Huh? what does THAT mean? This was my original Christmas decorating for the Living room of The Dowe... 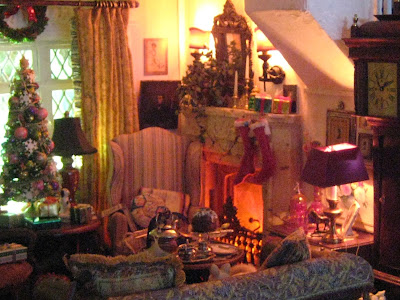